By: Cat
In: School 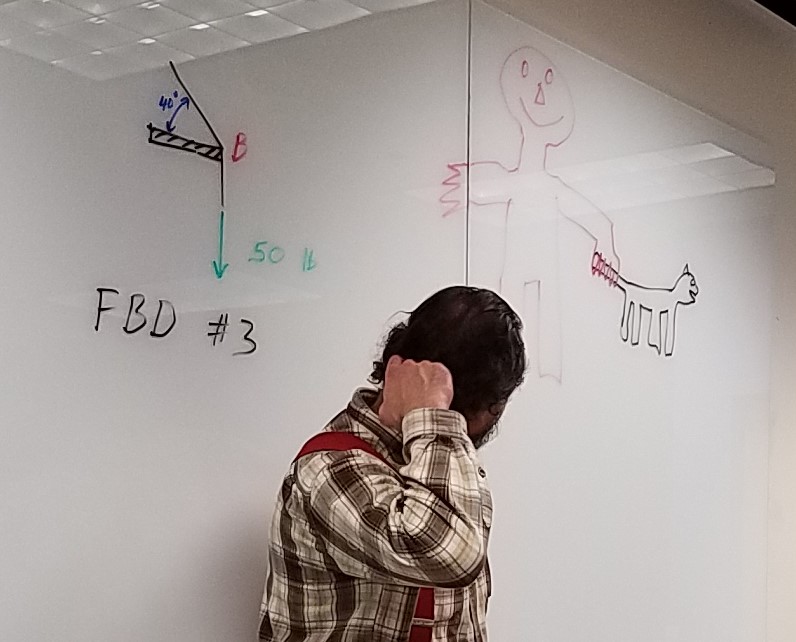 I recently went back to college for a degree in engineering. The nice thing about it is that since I already have a degree from this university, this next four-year degree will only take me three years instead of five. I don’t know who said, “Ah yes, a four-year degree. Let’s require 120 credit hours of course work at a realistic maximum course load of 15 credit hours per semester. Oh, and then another 30–no, maybe 60 credit hours of core requirements on top of that. Yes, that should do. Oh, and we’ll definitely need to offer the prerequisite courses very sporadically and, hmm, yes, let’s offer them at the same time as each other so you can’t actually take them all in a timely fashion.” Some admin must have been having himself a really bad day, I think.

College as a 32-year-old feels very different from college as a 20-year-old. I don’t know whether there was this much talking all my classes ten(ish) years ago, but I definitely didn’t notice it as much. There is constant whispering in every single class I’m taking, and only one of my professors bothers trying to shut people up. Today, instead of learning what I was supposed to learn about velocity, I got to hear the young lady behind me complaining bitterly about having to go out and buy close-toed shoes to wear in the lab because she didn’t own any close-toed shoes. I don’t know what her plan was for winter. I get to learn about kids’ vacation plans, their family’s learning disabilities, their mockery of the professors, and their bragging about how they “already know this stuff.” Too bad I can’t hear the professor. I sit in the front row every chance I get now. It doesn’t always help…

My calculus professor is the one who cuts them off and tells them, repeatedly, to stop talking. The other day, as I packed my backpack after a class in which he had told the same guy to stop talking three times, I saw the guy approach the professor and say, “I just thought you should know that I have to talk in class because of a medical condition. I literally am incapable of paying attention if I’m not talking.” Kid… that’s not a real thing. But good luck getting a doctor’s note on that one.

I’m also surprised that every class ends about five minutes early now because the students just get up and start packing their bags and give up keeping their voices down when they talk to each other. Then, still talking, they stand and shoulder their bags, giving the teacher pointed looks, and the professor usually just trails off and says, “Well, I guess we’ll finish this next time.” Ten years ago, the professor was the one who decided when class was over, and students that started packing their bags early were admonished. I guess they just gave up fighting? Or maybe the professors don’t want to be in class any more than the students do. Which is a shame, because I am paying a lot of money to sit in these classes.

Really, though, school is fun. The subjects are interesting, and I’m surprised at how easy the work is. I like my professors. My statics professor kind of looks like Al Borland from the TV show Home Improvement, complete with flannel. Today he had a note sticking out of his shirt pocket that may have been a grocery list. The one line I could read just said “hot dogs,” and they were crossed off. I guess it could have been a list of things he wanted to eat that day. Or things to clean out of the fridge. Or ideas for naming a child. Maybe his wife is pregnant and they’re discussing baby names. “Oh honey, if our baby is a girl, can we call her Lily, after my favorite flower?” “Sure, love. And if it’s a boy, we’ll name him Hot Dogs, after my favorite food!” “Um… yes, dear…” What a strange professor! 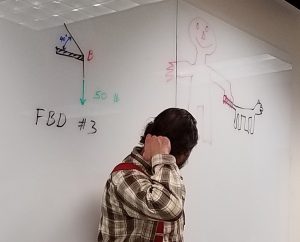 Sometimes I take pictures of the whiteboard because what he’s drawing up there is something I just can’t really copy easily into my notes.

A week ago, there was a guy on campus standing on a bench holding a megaphone preaching about God. As I hurried past him to get to class (my first class is on the opposite side of campus from the second, so I have to book it to get there on time), he was saying, “God gave us lungs so we could breathe oxygen! Oxygen! Not marijuana, right boys?” This last bit was directed at me and the two guys I was walking in proximity with because we were closest to him. I suppose I could have said something like “Well, so much for that pot farm I planted in my lungs,” because when I spoke, he would have realized I’m a girl and then he would have probably jumped to the evils of cross-dressing because apparently it’s impossible to recognize a female as a female if she happens to be wearing Carhartt work pants instead of a proper ladylike dress. 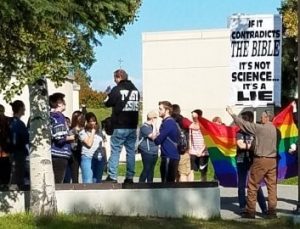 Anyway, two and a half hours later, when I left my third class and was heading back past him to get back to upper campus, I noticed there was a crowd around him and his buddy, who was holding a sign that said, “If it contradicts the Bible, it’s not science. It’s a lie.” I stood a safe distance away and watched in amusement as people waved a gay pride flag, guys made out with each other in front of him, and some girl at the front of the pack held a screaming match with him. She was definitely intentionally misconstruing the things he was saying, but he wasn’t exactly doing well either. I heard her demand to know where in the Bible it said being gay is a sin, and he responded, “Genesis six, nine and ten, ‘Woe unto the homosexuals, for God despiseth them and–” something or other. Well, it turns out that I’ve had quite an education about the Bible, and I definitely know that didn’t sound right. I looked it up. Genesis 6:9-10 says, “These are the generations of Noah: Noah was a just man and perfect in his generations, and Noah walked with God. And Noah begat three sons, Shem, Ham, and Japheth.” I didn’t volunteer this information, though.

Anyway, after I watched them say horrible things to each other for a while, I started sensing some mob mentality starting, so I decided it would be a good time to leave. I could still hear them for a long time, and shortly after I got out of sight, I heard chanting start. I wondered who was going to end up being a blood sacrifice. I never saw anything about it in the news, though, so I guess they all survived.

Comments are closed, but trackbacks and pingbacks are open.